Roles enable you to customize a form based on who is working with the form and its entry. You can use roles to drive your workflows in a number of ways, including: 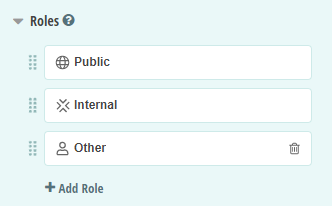 A workflow within Cognito Forms will include one Public role and one Internal role by default. You can assign as many Other role types as needed.

The Public role type is the default role for new form submissions. In other words, think of this role as an individual who kicks off the workflow process by submitting a new entry. Only one role can be assigned as a Public role type.

The Other role type is available for any other individual that needs to be involved in the workflow after an entry has been submitted. As with all roles, you’ll be able to assign Other roles conditional form visibility, allow for specific actions, and share role-based workflow links. 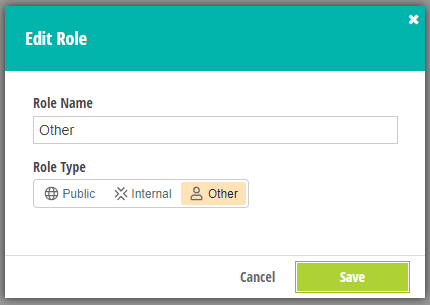 You can add, change or remove roles from the Build page of your form:

To rearrange the order of your roles, simply click and drag the role name within the Workflow menu. The order in which your roles appear won’t impact your workflow, however reordering them may be helpful in thinking through your process.

There is a maximum limit of 20 roles within a workflow.

If you need to change the name of a role at any point within your workflow, you’re able to do so within the Workflow menu. All calculations and conditional logic will automatically update with the new name of the role once your changes have been saved.

If you need to change the type of a role between Public, Internal or Other, just remember to update any existing email notifications to include the adjusted role-based workflow link as needed.

Before deleting a role you’ll want to consider if it’s referenced by anything within your workflow, such as:

To delete a role, click the trashcan icon next to the role name. Please note that roles that have been assigned as Public or Internal cannot be deleted.

The Reviewer role is only relevant to forms created prior to Workflow.

If you see a Reviewer role type under Roles within your Workflow Settings, this means you had previously sent a View Link related to your form. Reviewer roles are reserved for these past read-only links, and will therefore default to a read-only view when the role is referenced throughout your workflow.